In the New Testament, we learn about the life of Christ, and of His Apostles. We hear of the miracles that Christ performed, and of the lives He touched. We learn lessons of love and service to others through His parables, and we learn to accept others through His ministry. We see the attributes of His Apostles... unwavering loyalty from Peter, and the unconditional love of John. But what do we hear of the Apostle Thomas?

The Gospel of John gives us the most information about Thomas. In John 11:16 the Apostles were hesitant to go back to Judea, where the Jews had attempted to stone Jesus. But Thomas, showing his devotion and love for Christ, says, "Let us also go, that we may die with him." He speaks again in John 14:5. Christ had explained that He was going away to prepare a heavenly home for His followers, and that one day they will join Him there. Thomas reacts by saying, "Lord, we know not whither thou goest; and how can we know the way?" Thomas wants to follow the words of Christ, but he was afraid that without Christ, he would not know what to do. He is loyal. He knows and loves Christ.

But we don't remember this about Thomas. What we do remember, is that Thomas was a doubter, and poor Thomas really gets put through the ringer for it. 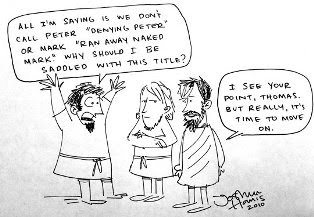 Last summer, I performed with my Young Single Adult Stake for the work of "Lamb of God". Thomas is one of the main "characters" in the story, and there is a song, sung by Thomas called "Sometime We'll Understand". Here are some of the words from that song:

Can you really blame Thomas? I can't. If I were in his shoes, I would have been just as skeptical... not because I don't believe that Christ is Divine, and the Son of God, but because the emotions and fear that I would have felt, seeing my Savior crucified, would have rattled my brain. Hard. So my friends telling me that they had seen Him... I simply would not have been able to believe it.

Christ Atoned for our us. He felt the struggles and pain we feel every day. He has felt the weight of the questions and uncertainty we bear. He knows the emotional turmoil we feel coming from all directions. He knows the skepticism, the hesitation, and sometimes outright disbelief that we feel in our day to day lives.