So I'm at the Coffee Garden in the 9th & 9th neighborhood in Salt Lake City. I ordered a hot chocolate, because the only seat available was next to the door, and it freezing outside. (For those of you outside of Northern Utah, Mother Nature decided to blanket us in 18-24" of snow over the last 2 days... and Snowbird got a whopping 50"!) 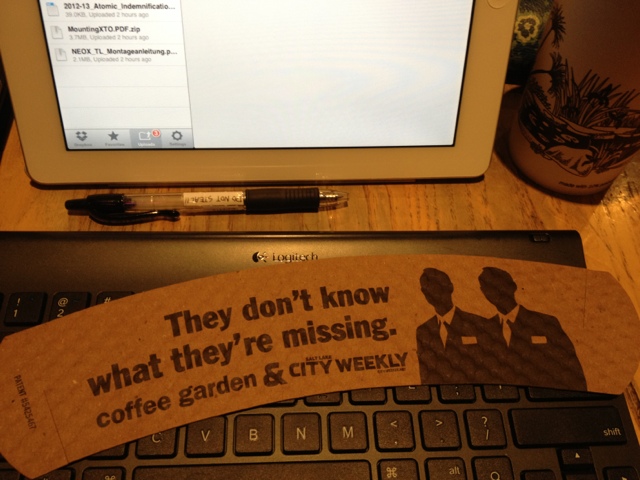 Posted by Unknown at 8:10 PM No comments:

In the immediate aftermath of Tuesday's election, social media exploded. I saw many posts with cheers of victory. I also saw posts full of complaining... predicting the Second Coming of Christ, and declaring President Obama to be the Anti-Christ. I also saw posts of people threatening to move to Canada... and I urge them to grow a pair, and do it. Good freaking riddance.

I was on the winning end of the ballot. President Obama was reelected, Jim Matheson (D) edged out Mia Love (R) for reelection in the House of Representatives, and Ben McAdams (D) won election for Salt Lake County Mayor. Although Orrin Hatch (R) beat Scott Howell (D) to keep his seat in the Senate, and Governor Gary Herbert (R) won reelection against Peter Cooke (D) for Utah Governor, I still finished at 3-2, and I'm counting that as a win. I gave my fair share of hoorays. I also played a lot of defense... A LOT of defense. A friend of mine went as far as to call me an apostate for my liberal political leanings, and suggested that, "because I support legislation that kills an innocent baby, that I deserve to be killed simply because I am a lesbian... that that would be a step in the right direction for this country to return to its former glory. (Or back to the 1950s).

Needless to say, I told him to go fuck himself, and I went on with my day.

But this post isn't about all of the asshole Republicans I know. This is about compassion.

Everyone who's LDS, knows that Church Doctrine states that marriage is between one man and one woman. Most Mormons will confirm that in their own testimonies. Melissa and I went to dinner with her mom Monday night. At the end of the meal, she said that she had prayed long and hard about homosexuality and the Church's Doctrine. She studied in the Standard Works (Bible, Book of Mormon, Doctrine & Covenants, and The Pearl of Great Price), and studied articles and talks from the Ensign and General Conference... specifically from the First Presidency and the Quorum of the Twelve Apostles. She said that she has an overwhelmingly strong testimony of marriage being between one man, and one woman. That anything else is against the Lord's sacred Plan of Happiness. And that it makes her very sad for Melissa and I, because we can never achieve the Celestial Glory that is promised to us.

But she acknowledges our relationship. She acknowledges that we are dating. She expressed that she enjoys my company, and she enjoys it when I come to family functions. I am currently there as "the roommate"... because she, and Melissa's step-dad are not yet ready to "come out" as the parents of a gay child (and her girlfriend). Its not ideal... I really am not a fan... but... I know that she needs space. She needs time to process.

I worried that once Melissa and I get married, she still won't be ready to acknowledge us for what we are. I'm worried that when we have children, she won't acknowledge our family as legitimate. I worry that I'll be "the roommate" for the rest of my life. But, she likes me, and she loves her daughter unconditionally. And for now, that's what counts.

Mormons are not hateful bigots (OK... some are...). Mormons do not blindly follow the council of the First Presidency, Quorum of the Twelve, and the rest of the General Authorities (OK... fine... those people exist too...). Sure, the Church has a dirty political history with Proposition * in California in 2008. But the Church was curiously absent in the Maryland, Washington, Minnisota, and Maine ballot measures. There are many Mormons out there who support "the liberal agenda" (as Melissa's Mom calls it). There is even an emeritus General Authority, Elder Marlin K. Jensen, who spoke very lovingly about the gay Mormon community.

There are groups such as, Mormons Building Bridges, and Mormons for Marriage Equality that all support the legalization, and recognition of same-sex marriage. Mormons Building Bridges has marched in countless Pride parades this summer, I hope will continue to do so year after year. USGA (Understanding Same Gender Attraction) is an unofficial group at BYU, that consists mostly of LGBT students, but has a significant group of "straight allies"... people who believe in us... believe that we are just the same as everyone else, and that we deserve the exact same rights as everyone else.

I can only hope that this country will begin to realize that my sexual orientation does not cause natural disasters. That it does not cause global warming. And that I will not tear down the sanctity of marriage, simply by getting married. I will not be hurting anyone.


"We hold these truths to be self-evident, that all men are created equal, that they are endowed by their Creator with certain unalienable Rights, that among these are Life, Liberty, and the Pursuit of Happiness." - The Declaration of Independence

"I have a dream that one day this nation will rise up and live out the true meaning of its creed: `We hold these truths to be self-evident: that all men are created equal.`" - Dr. Martin Luther King "I Have A Dream" speech
Posted by Unknown at 6:56 PM No comments:

I'm a very spiritual person... Always have been. Even since I've been a little girl, I have always been keen to the promptings of the Spirit... Even when I don't listen to them.

There was something about the Gospel, that the Catholic Church just didn't have. I felt like all the loose ends were tied up. Everything just clicked and made sense. The Bible supports the Book of Mormon, and the Book of Mormon supports the Bible. It never made sense that revelation would just stop at the death of Christ, and that there were no more Prophets to guide the world... It never made sense that the Canon just closed. So when the missionaries (Elder Lund, and Elder Hill) taught me that families were eternal, and that there was no "Til death do us part", I felt at peace (I had always believed that in heaven, families were together... But that is not Catholic Doctrine... Earthly relationships ended at death). When they taught me that the Canon was not closed, and that there was a living prophet on the earth, Thomas S. Monson, who receives revelation for the Church, and for the world, I was at peace... These were all things that I already believed. That's how I got my "common sense" testimony. And that is the testimony that I ran on when I got baptized.

My "spiritual" testimony didn't really kick in until this last year or so. My life was in the can... I was denied the opportunity to serve a mission, and I was crushed. I hated the Church, and I hated God. I started drinking, I stopped praying, and I stopped believing that God loved me. And I was in a dark, dark, place. I was done. And then I took a step back, and realized how miserable I was without the Church. I wasn't unhappy all of the time, but I wasn't really happy either. I was just "blah". So I decided to go back. No one pressured me, and it wasn't because of anyone else... It wasn't for the Bishop, or my visiting/home teachers... It was for me. Because who cares that I like other girls?? It's no one's fucking business!! It doesn't matter. I am no different than anyone else in my singles ward (except for the fact that I'm the vegetarian in the meat market). There is not one God damned person in my ward who can look down on me, or judge me, because they sure aren't perfect... My former home teacher should be entered as Exhibit A for the defense (but that's a story for... well...never.). I belong there just as much as everyone else.

Now, that doesn't mean that I agree with the Church on every position... Not in the least. And they range for little things, like not having a special Christmas Sacrament Meeting (I still go to Midnight Mass at the Cathedral of the Madeline every Christmas for that reason... If you've never been, GO)... To big things, like homosexuality (among others). It hurts me that I can't go to the temple anymore... I think that's what I miss the most. I hate that I am expected to live my life alone, and repress any and all attractions I have. I hate that I will never have a temple marriage, and that because I will never have a temple marriage, I will never reach the highest degree of salvation. All of these things seriously suck for me. I hate that certain General Authorities still speak on the topic of homosexuality, who have been so hurtful with their words in the past. (specifically President Boyd K. Parker and Elder Dallin H. Oaks of the Quorum of the Twelve Apostles). I hate that there are members of the Church (and society at large) who believe that I am sick... And that I can "overcome this affliction". It's annoying, and it implies that my life, feelings, attractions, and experiences are not authentic. I also hate that people in the Church believe that the Republican Party is God's anointed party...

But that's not the point...

The General Authorities are still men. They are inspired, and I sustain them every 6 months in General Conference... but they are still men. The ninth Article of Faith states, "We believe all that God has revealed, all that He does now reveal, and we believe that He will yet reveal many great and important things pertaining to the Kingdom of God." They are guiding the Church based on the revelation that we have received, but also with the cultural, and generational bias that comes with along with it.

In the spirit of the 9th Article of Faith, I genuinely believe that the Church will give full fellowship to the LGBT Latter-days Saints. I really do. Some of you, (like that anonymous comment on my post New Ward) probably think I'm an idiot for this... Sticking in an organization that "hates" me. The organization doesn't hate me... Some of the membership, yes... But honestly, I hate them too.

I am a Mormon, and I am a lesbian. Not "but"... "and". They are inseparable parts of my identity... One cannot be without the other. I don't want to leave the Church. And I don't want to be straight. If I woke up tomorrow morning, and was "cured", I would cry, and plead with The Lord to give it back to me... Because I've invested far too much time learning to accept myself for who I am, and shaping myself into the kick ass person I am today, to start all over again. This Church has done more for me than I could ever express in words. And this restoration of this Gospel has done more for the world than any other spiritual event in history, save the Atonement of Christ.

I'm happy. And fuck anyone who thinks that I don't deserve it.
Posted by Unknown at 7:30 AM 2 comments: