What Would Jesus Do?

This Saturday, April 5th, I had the opportunity and privilege to stand in line with a few hundred of my fellow Sisters, and many Brothers, seeking admission to the General Priesthood Session of General Conference. I stand in awe of the testimonies of the women I surrounded myself with that day, and I am so blessed to be able to call them friends.

This is my account of the events of that afternoon. My opinions and actions are mine, and many other women have similar stories. I'm just blessed to be able to voice my own.

I attended the Saturday Afternoon Session at the Conference Center right before the General Priesthood Session. At the close of the session, I watched the crowds filing out of the auditorium, and watched the seats empty. With a start, I realized that in a span of one hour, I would no longer be welcome inside of the building. It was a sobering realization.

I arrived to City Creek Park just before everyone started lining up to leave. I was herded into line right after many of the women in leadership positions, and other prominent figures like Joanna Brooks and Margaret Toscano. As we started leaving the park, there were a handful of men with signs that started yelling at us. One yelled, "Get back in the kitchen and make me some cookies!" Another yelled, "Go make me a ham sandwich and get me a Coke!" I stifled the urge to laugh... the only sandwich I would be making for a man would be a knuckle sandwich... to the crotch. But as I walked past them, I blew them both a kiss. In that moment, there was no better expression of love and compassion I could have given them.

The Salt Lake Police were there, escorting us to Temple Square. They directed us to cross the intersection from the park to Temple Square diagonally. I certainly thought it was a good idea, after all, it was more direct. The people in their cars however, did not appreciate it. Most of them were in their Sunday best, and it was clear that they were members of the Church headed to or from Conference. There were loud honks from their horns, offensive gestures out of rolled down windows, and shouted insults, and jeers. From one I heard, "You're blocking f****** traffic!" From another, "Get out of the street! Get out of the Church!" How can it possibly be seen as Christ-like, when you are screaming and flipping people off? How would Christ react to us? What would He say to us?

The hail started coming down, just as we entered the grounds by the Church Office Building. As we walked, there were women talking about their pioneer heritage. That no matter the hardships, the cold, the rain, or the snow, they persevered. I'm a convert; I have no pioneer heritage. But this helped me understand the hardships of the pioneers, and their quest for equality, and validation in their religious beliefs. The hail continued to fall, and I (without a coat or umbrella) started getting cold, wet, and a little bit miserable. But all I could continue to think was, "If this doesn't show my will and dedication for the hard work, and dedication of the priesthood, I don't know what will."

Once we got the the southeast gate of Temple Square, I noticed that the gate had been shut. The gates are NEVER shut to Temple Square unless it's after hours. I was shocked. I remembered seeing a news release saying that the Church was not going to bar us from entering Temple Square. And yet, the door was closed to us, simply because we are different. Kate noticed that the gate was not locked. So we opened the door, and we started moving towards the tabernacle.

We walked confidently, with our heads held high. As we started getting near the Tabernacle, many of the men looked at us with scorn, and distaste. There was even a man asking to see our Temple Recommends. Yet nothing, not even the hail pelting my skin, could diminish my resolve, nor put out the fire burning inside of me. I was doing what I knew to be right.

Suddenly, without warning, an older gentleman ran right into me, cutting me off, causing me to stumble, and almost fall to the ground. I couldn't believe it. There is no way that he could not have seen me! I was walking two by two near the front of a long line of women! I regained my balance, and called out to him, asking if he was ok. He never once looked back at me.

I kept moving, and I took my place in the stand by line. Women and men were lining up behind me, and the line was making its way around the Tabernacle. I started chatting with a few other people in line near me, when I noticed two men in line with us, who were not a part of Ordain Women. They were chatting with some people in front of me, when the younger man noticed that a female usher was quietly leading a handful of men to another entrance. The young man started urging the older man to get out of line, and to follow the other usher to the other entrance. Once I saw what was happening, I knew at that moment, that the "stand by" line that I was standing in, was a fake. The "real" line was somewhere else... somewhere where I was not invited. 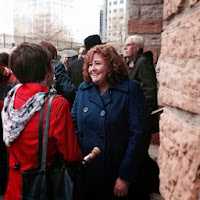 At last, I was at the front of the line. I was standing in front of Kim Farah, the Church's chosen representative from the Public Relations Department. She introduced herself, and the first thing that she noticed was that I was soaking wet. She cared about me as a person, not as a perceived "protester". We chatted for a moment, and I asked for the opportunity to show my willingness and dedication to serve my fellow sisters and brothers in ways I have never been able to do, because I am a woman. I asked for the opportunity to bless my family and bless my home with the power and authority of God. She smiled, and politely gave the reasons why women are not ordained, and encouraged me to watch the General Women's meeting, if I had not yet seen it. I told her that I had, and that I appreciated the small steps the Church has taken in regards to the female membership and participation in our doctrine. I mentioned how pleased I was last year to listen to the historic moment where a woman was finally asked to pray in General Conference, and how exciting the news was when the photographs of the Relief Society, Young Women, and Primary Presidencies were hung in the Conference Center, next to the existing ones for the men.

Before I left, I asked her one more question. I asked, "Kim? Because this is the general priesthood meeting, are non member males, or male members who have not yet been ordained, allowed into the meeting?"

I replied, "Even though they do not hold the Priesthood, they are still admitted?" She answered yes again, saying that it was part of their instruction as men in the Church, similar to how women have the Women's Meeting, even if they are not members.

I then said, "Well, that is unfortunate. I could understand being barred from the meeting if it was a matter of not holding the priesthood, because then the man who lives next door to me would also be denied entrance. But it is unfortunate that my only disqualifying trait is the fact that I am a woman." I thanked her, and I gave her a hug. Before I walked away however, I paused at the closed door of the Tabernacle, and I stepped up to touch the door. I could feel the faint vibrations from the activity inside, and I said a very quick prayer of thanks, and asked the Lord to bless me with strength and patience. As I opened my eyes, a faint voice told me, "Stay yet a little longer." Only then, with my strength renewed and my testimony reinforced, did I walk away.

That night, I saw on Salt Lake Tribune the Church statement about the event... claiming that we refused to leave when asked, among other things. About a week before General Conference, the Church banned the media was from entering Temple Square. Without the press, the Church's statement is the only information released, and the information is extremely one sided. I was never told by a Church employee to leave. In the end... the fact that the Church issued this misleading statement, hurt me more than anything else over the weekend. And in hindsight, I am so glad that I had the opportunity to speak to the press after we were denied entry to the meeting. It is important for people to know what had happened, through the eyes of the people who experienced it. 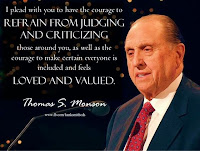 Regardless of your personal feelings towards Ordain Women and it's mission, and regardless of whether or not you agree with my view of the world, and my views on the Church, what do you think Christ would have done. Would He have honked His horn and yelled out of His car window at me? Would He have caused me to stumble and fall? Would He have ridiculed me, questioned my testimony, and tell me to leave His Church? No! He would have waited patiently in His car, and caught me as I fell, so I could steady my unstable feet. He would have told me that He loved me unconditionally, and made sure that I felt welcome and valued in His Church. He would have welcomed me with open arms. So knock. Ask. Have strength, and have courage. But ask yourself... What Would Jesus Do? 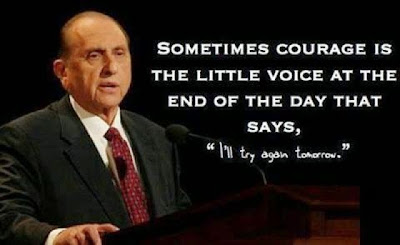